Last year, I shared about how God blessed my daughter with a place in NUS.

I would now like to share a wonderful testimony about my son. He is a year younger and currently a final-year student in Nanyang Polytechnic.

He is very passionate about soccer. He plays futsal (indoor soccer on an artificial turf) with his friends nearly every month.  He goes to the Jalan Besar stadium to watch local teams occasionally.  He dreams of becoming a soccer pundit some day.

But what was of much concern to us as his parents was the amount of time he increasingly spent on the xBox (a video game console developed by Microsoft) playing FIFA online, a soccer game where he could pit his skills against other enthusiasts located all over the world.

I recall also telling my wife, “Your son is spending way too much time on FIFA. As his mother, what are you going to do about it?”

She replied, “Hello. You are his father and in charge of discipline. What are YOU going to do about it?”

Both of us would then end up laughing.

However, about a month ago, things seem to get from bad to worse. It was his month-long term break, so he would spend practically all his waking hours playing FIFA. He would also curse and swear at the virtual referee for a decision that went against him or if his team conceded a goal / squandered a chance to score a goal. He also did not like anyone to sit in his vicinity because our presence would distract him and make him lose his concentration.

As a parent, it was very natural for me to want to confront him, sit him down, lecture him, tell him to spend his time more productively, etc etc.

But praise God that I did not have to!

Sometime last week, when I got home, I was expecting to see him in his usual spot in front of the living room TV.

Instead, he was in the study doing his homework!

I had to pinch myself twice to check if I was awake or dreaming.

“How come you are not playing FIFA?” I asked.

“Oh, I sold my xBox.” he replied nonchalantly.

“Ya. Not bad I got quite a good price for it on Carousell” 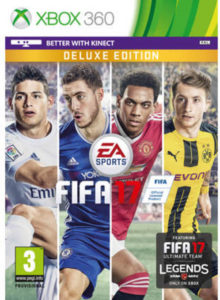 [*EA Sports will release a new version of FIFA some time in September every year. They will add new features and also reflect the latest players and the clubs they play for. For example, in FIFA 2016 Paul Pogba was reflected in Juventus. In FIFA 2017, he is reflected in Manchester United]

“I found it very hard to get used to the new features.”

And just like that, the addiction was broken! Hallelujah!

When my wife and I prayed for him, we had expected God to gradually wean him off online gaming.  Maybe from 8 hours each day to 6, then to 4 then to 2, then to just weekends, etc.

But we never expected God to cause things to happen such that he gave it up  “cold turkey”.

Indeed, with God all things are possible. Amen?