I have a confession to make.

I have been taking potshots at a certain radio DJ lately. Let’s call him G.

I started disliking him about 10 years ago, when he switched loyalties from supporting Arsenal to supporting Man U.  I myself have been supporting Aston Villa since seeing them on TV in 1977, through thick and thin and through ups (we were domestic champions in 1981 and champions of Europe in 1982) and downs (we got relegated from the top division in 1987), and the only thing to me that was worse than changing clubs was changing spouses.

Here was someone who was guilty of both.  Even before that, G had divorced his first wife (let’s call her K) in 2003 only to almost immediately start moving with another radio personality (let’s call her J1).

Then when I saw him and J1 sitting in the congregation on some of his Pastor’s DVD sermons, I was prepared to give him the benefit of the doubt, especially so when he took his pastors’ advice in tying the knot with J1 in 2004, rather than continue to live under the same roof as boyfriend and girlfriend.

the news broke out about 4 years back that he was getting divorced again!

Very soon after, he started seeing another radio personality (let’s call her J2).  What made it all the more scandalous was that J2 had a huge crush on G when she was just a poly intern at 17 and he was already 26.  The rumours going around was that he had broken off with J1 to be with J2.

This to me was the final straw.  It didn’t bother me so much that he was moving on from one partner to the next.  After all, many celebrities in the USA are famous for doing that, for instance, John Mayer, Taylor Swift, Tom Cruise, just to name but a few.

What bothered me was that he was sitting under the teachings of the best grace preacher in the world and yet was not possessing the grace message.

He was in essence giving that church a very bad name.

And hence the potshots.

On the evening of 16 Nov 2013, at 8:09pm, I commented on that radio station’s Facebook post “what glory is there in being a public success but a private failure?”

That must have really hit a raw nerve, because the very next morning, on 17 Nov 13 at 9:08am, I received a Facebook message from him as follows:

“Aha, here’s my chance to really give it to him good!”  I said to myself…

G:         And don’t use MY Pastor’s words against me ok? New Creationers are cool people of Grace. I’ll be looking out for you in Church! Perhaps I’ll get meet Mr Public and Private success?  You are exactly the kind of person who gives Christians a bad name. Simply awful and judgemental.

Me:      its guys like u that give newcre a bad name. perhaps u shd go to the other megachurch. i’m sure u’d fit right in

G:         Wait till I show Pastor this message. How disappointed he will be.

Me:      looks whos talkin bro. pot. kettle. black. go ahead. make my day. not as disappointed as he has been w u.  u cheapen grace bro. no condemnation but go n sin some more?

Me:      a blessed sunday to u n your (present? current?) family too.  sigh. u n j1 could hv been a great testimony. pls dont blow it again

G:         Omg! Well done. Well for her sake, I will not say anything here. Fine. She’s obviously your personal friend. Ok I’ll back off.

Me:      hvnt had the pleasure or honour

Me:      but why stop there? that woman had 5 husbands n the one she was living w wasnt her husband. go for it!

After sending that, I began to realise that I had gone overboard, so I then wrote:

Me:      say, u free for a dessert some time next wk? my treat/peace offering. i am prepared to hear your side of the story

That was the last I heard from G and if he didn’t want to tell me his side of the story, that would mean that he had no defence and I was right to conclude that he was truly a jerk with no hope.

Or so I thought… 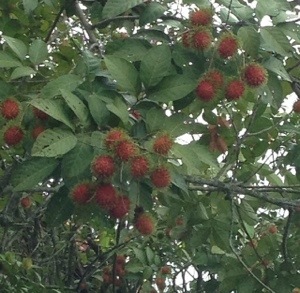 I have been living with (some would say living off) my parents all my life.  My mom went to be with the Lord in June 2012, and so I now live with my dad.  We moved here back in June 1978 and there are 2 rambutan trees in the front yard.

Over the years, the trees have been bearing lesser and lesser fruit, and became totally barren about 3 years ago.

Two weeks ago, on 2 Nov 2013, I was thus pleasantly surprised to find really red and huge rambutans growing, and just had to take a photo of them.

However, I did not even bother to eat a single one of them because about 5 years back, I ate a couple of them and found them not only small and tasteless, but that the flesh stuck to the seed.  That was a huge turn off for me and since then, the only rambutans I bother eating are those that are found in tin cans.

Then on the very evening of 17 Nov 13,  at 6:25pm, while we were having dinner, one of my dad’s care group members sent him the following sms: 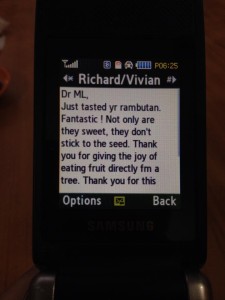 “Dr ML, Just tasted your rambutan. Fantastic!  Not only are they sweet, they don’t stick to the seed.  Thank you for giving the joy of eating fruit directly fm a tree.”

Dad showed me the message, and upon returning home, I had to try one for myself, and sure enough, it was delicious!  I never imagined that those trees could ever produce again, what more fruit that was the best I have ever tasted in the past 35 years!”

3. THE LORD CHASTENS AND I REPENT

Upon finishing off that rambutan, I sensed the Lord’s prompting

“Son, I restored the rambutan trees to their full glory, even after you had given up on them.

“Likewise, I am going to restore G.  Why are you writing him off when I am not done with him yet?”

Upon receiving the Lord’s chastening, I quickly repented and sent G a flurry of messages, telling him about the rambutan trees and ending with the following message:

“bro, u r going to be both a public and private success for the glory of Jesus.  start believing right and you will live right too!”