It has been more than 3 months since I last blogged, mainly because there has been no flow recently.

Well, I am happy to report that I just felt prompted by the Holy Spirit to blog after seeing the Instagram posts of a childhood friend and a colleague, both of whom attend New Creation Church.  They had coincidentally shared the same verse, namely Hebrews 6:14. 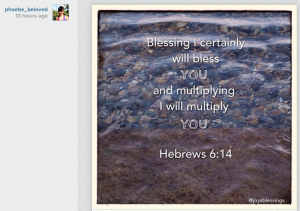 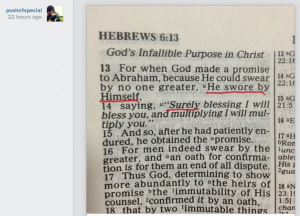 I will come back to the above passage, but let me digress for a while.

When I was in Secondary Two all those years ago, I recall our English teacher telling us that the words “repeat” and “again” should not be used in the same sentence because the word “repeat” by itself already denotes repetition, so to use the word “again” would be redundant and superfluous.  Hence, “Can you please repeat that?” would be a complete sentence, while “Can you please repeat that again?” would not be grammatically correct.

It was with this mindset that I found certain passages in the Old Testament to be rather odd in that the author seemed to be repeating himself.  For example,

“My son, give attention to my words; Incline your ear to my sayings.” (Proverbs 4:20 NKJV)

“He has not observed iniquity in Jacob, Nor has He seen wickedness in Israel.” (Numbers 23:21 NKJV)

“For there is no sorcery against Jacob, Nor any divination against Israel.” (Numbers 23:23 NKJV)

In fact, many of the Psalms seem to contain verses that appear to say the same thing twice but in a different way.

It was only in recent years that I have come to understand that because the Old Testament was written in Hebrew,  we have to put aside our Anglicised background when reading the Scriptures.  Proverbs and Psalms are what are known as Wisdom Literature and the repetition found in many passages is similar to what is commonly used in poems and nursery rhymes.

But what is more fascinating is how Hebrew uses the same word twice to denote strong emphasis.  That was what I learnt from Ps Joseph Prince as he had mentioned this in one of his sermons.

Consider the following passage in Genesis 2:

16 And the Lord God commanded the man, saying, “Of every tree of the garden you may freely eat; 17 but of the tree of the knowledge of good and evil you shall not eat, for in the day that you eat of it you shall surely die.” 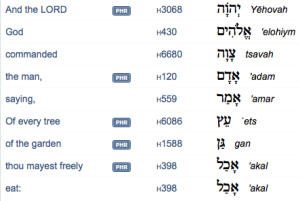 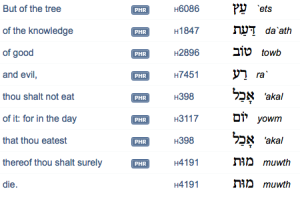 One of my favourite Old Testament verses in Isaiah 26:3, which is “You will keep him in perfect peace, whose mind is stayed on you, because he trusts in You”.

If we look at the original Hebrew text, we see the word “shalom” (H7965) being repeated twice, emphasising that one will experience “perfect peace”. 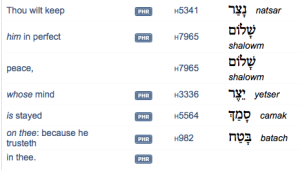 Coming back to the 2 Instagram posts above.  When I saw that passage, there were 2 things that stood out.

Firstly, God had sworn by Himself.  God does not need to swear because His word alone is sufficient.  By swearing, and swearing by Himself, He was giving added emphasis to the promise He was making to Abraham.

Secondly, Hebrews 6:14 actually makes reference to the incident recorded in Genesis 22 whereby God had asked Abraham to bring his only son Isaac up to Mount Moriah to be sacrificed.  God was pleased with Abraham because he was willing to give up his son, which would point to the day when God Himself would give up Jesus as the ultimate sacrifice to redeem humankind, viz:

15 Then the Angel of the Lord called to Abraham a second time out of heaven, 16 and said: “By Myself I have sworn, says the Lord, because you have done this thing, and have not withheld your son, your only son— 17 blessing I will bless you, and multiplying I will multiply your descendants as the stars of the heaven and as the sand which is on the seashore; and your descendants shall possess the gate of their enemies. 18 In your seed all the nations of the earth shall be blessed, because you have obeyed My voice.”

In particular, verse 17, reads “blessing I will bless you, and multiplying I will multiply your descendants”.  The English translation appears rather odd, so I was expecting the original Hebrew text to repeat “blessing” twice and “multiplying” twice, and sure enough, it did!!!

As can be seen in the interlinear text shown below, barak (H1288) and rabah (H7235) appear twice, as a way to emphasise that God would abundantly bless Abraham and exponentially multiply his seed. 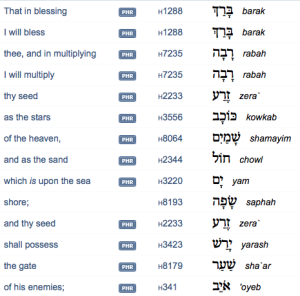 Learning Hebrew has indeed been a very enjoyable journey and I look forward to discovering even more passages in the Bible where words are repeated twice to convey emphasis.  Please, repeat that again!!!